skip to main | skip to sidebar

The State of Europe 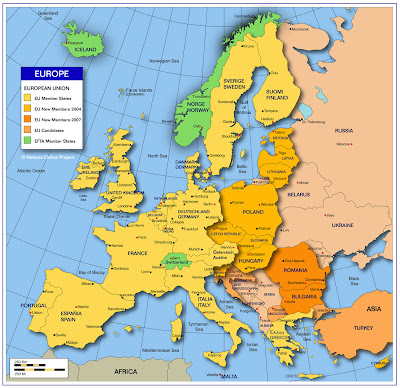 It is now official.The European Union has now morphed into one single entity with 27 individual states.Sort of.With the actions taken over the weekend by the Eurozone to prop up the Euro,the European currency,they have effectively set up a national government structure not unlike our own.

In effect,the former individual countries of Europe had their own unique identities which are no no different than traveling from Ohio to Kentucky.You've merely crossed a state line,big deal.Of course,they will vehemently deny this is the case.It will take many years,and probably decades,for this to simply be accepted.

What you will see are transformative changes that all 27 members of the EU must accept or face being shut out from the permanent bailout fund now in place.Even though Germany was in the strongest position financially today,they also caved in so as to not waste the last half century's work in building up the Euro.

In essence,a new superpower has been born.The GDP of this new superpower is over $16 trillion dollars,making it the largest in the world.The U.S. now plays second fiddle at around $14 trillion.Europe has over 500 million citizens.

You may say,wait,what is the Eurozone?It comprises 16 member countries that use the Euro as their primary currency.These are the members that voted on the bailout package of nearly $1 trillion dollars over the weekend.What you'll see occur,however,is pressure for the other members of the European Union to fall in line and adopt the Euro.That's why I say this will take years or decades to fully implement.The European Union has already been evolving in this manner since its inception in 1993.The Eurozone will now follow suit.

What does this mean?Nothing good.But that will come later,probably years.But the groundwork has now been laid to expand the same bubble/bailout mentality across the entire continent of Europe as we have here in the United States.Meaning the crashes will be even larger with no one left to bailout the State of Europe.Also meaning the crashes from either side of the pond will be catastrophic as our global economy is now more intertwined than ever before.Hang on for the wildest ride the globe has ever seen.

Some will question whether Europe has now moved toward a more federal,state structure like the U.S. or if the Euro will crash.Take it to the bank that the Euro will crash.Will it be this year or many years no one knows.But the EU has taken the first necessary step to guarantee its demise.

However,today we will hear nothing of the sort.The stock markets will soar across the globe.Economists will crow about this being long overdue and that Europe is finally standing fully behind its Euro.No one can predict accurately when it will all come crashing down.We have history as our guide to illustrate the exact mistakes that will occur as the era of printing press fiat money has now come to the Euro.More to come...
Posted by Bug Guy at 12:30 PM

Congress shall make no law respecting an establishment of religion, or prohibiting the free exercise thereof; or abridging the freedom of speech, or of the press; or the right of the people peaceably to assemble, and to petition the Government for a redress of grievances.

Preamble to the U.S. Constitution

We the People of the United States, in Order to form a more perfect Union, establish Justice, insure domestic Tranquility, provide for the common defence, promote the general Welfare, and secure the Blessings of Liberty to ourselves and our Posterity, do ordain and establish this Constitution for the United States of America.